Adalberto Battaglia's Kitchen at The Kilburn Arms in NW6 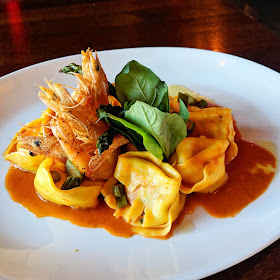 Adalberto Battaglia, the Italian chef who has been running Quinto Quarto pop-ups around London for several years, is now cooking at The Kilburn Arms on Willesden Lane, NW6.  It's a large pub, with tables inside and out, and a big kitchen where Adha does his magic.

The menu is essentilly a pub menu, but Adha is also introducing some of his Italian & Roman classics, including a knockout lobster ravioli (see pic above).

He is also taking bookings for private dinners within the pub - contact him via his site.

Adha is cooking there on an ongoing basis, but will be taking a break in August.

When - Daily, until at least the end of July